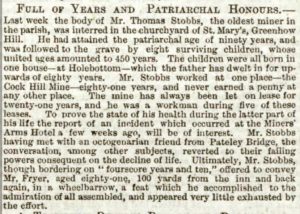 Last week the body of Mr Thomas Stobbs, the oldest miner in the parish, was buried in the churchyard of St Mary’s Greenhow Hill. He had attained the patriarchal age of ninety years, and was followed to the grave by eight surviving children, whose united ages amount to 450 years. The children were all born in one house – at Holebottom – in which the father has dwelt for upwards of eighty years.

Mr Stobbs worked at one place – the Cockhill Mine for eighty one years and never earned a penny in any other place. The mine has always been let on lease for twenty-one years, and he was a workman during five of these leases.

To prove the state of his health during the latter part of his life, a report of an incident which occurred at the Miner’s Arms Hotel a few weeks ago will be of interest. Mr Stobbs having met with a octogenarian friend from Pateley Bridge, the conversation, among other subjects, reverts to their failing powers consequent on the decline of life. Ultimately, Mr Stobbs, though bordering on “four score and ten”, offered to covey Mr Fryer, aged eighty-one, 100 yards from the inn and back again in a wheelbarrow, a feat which he accomplished to the admiration of all assembled, and appears very little exhausted by the effort.