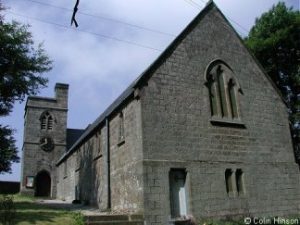 The church was completed in 1858 and paid for by public subscription. The parish of Greenhow was carved out of the parish of Pateley Bridge in 1860 to serve the growing community of mine workers living on the hill. It was built by the lead miners themselves, using locally quarried stone. The foundation stone was laid in 1857 by the then Bishop of Ripon. Soon after in 1863 a recreation room was opened with facilities for reading newspapers and playing games.

The east window was originally a triptych depicting the risen Jesus, flanked by St Peter and St Paul. The windows were replaced by the memorial windows you can see today. They were gifted to the church by friends and parishioners of Rev Henry Kershaw, the first Vicar of this parish from 1858 – 1898.

The roof and ceiling were replaced in the 1980’s with labour given freely by local Dales folk. The west end wall was stripped and cleaned in 2002, again by volunteers.

This is a small, scattered congregation, but the special services held during the church calendar, attract worshippers from the whole dale. St Mary’s has now returned to Pateley Bridge and is part of the parish of Upper Nidderdale, which comprises six churches, from Middlesmoor to Wilsill.

There is a small cemetery outside the church which rapidly filled up. This cemetery was never expanded for whatever reason. One thought was that there might be a danger of contaminating the local wells. Instead a new cemetery was built on the east end of the village, just below Coldstones.

The lychgate was made by Robert Thompson (the famous mouseman), whose signature of carved mice can be seen inside the roof. It was designed by J.S.Syme of York and erected in the 1940’s. The lychgate was a gift from Miss D Chadwick, in memory of her father, Rev James Chadwick, Vicar of St Mary’s from 1894 to 1903,and was dedicated by the Bishop of Ripon. In 2003, funding by Nidd ANOB and Harrogate Borough Council has led to it undergoing extensive repairs and renovation, by Martin Holmes of Middlemoor. The lychgate was actually removed and taken away for this to happen.

The dedication is from Psalm 121, “I will lift up mine eyes to the hills from whence cometh my help”. A most appropriate Psalm for Greenhow, with the highest parish church in the country.

The cemetery is now managed in such a way so as to preserve the ancient and protected species of flora, which includes primroses and three type of orchid.

“Greenhow Hill stands up ower Pately Brig. I reckon you’ve never heeard tell o’ Green-how Hill, but yon bit o’ bare stuff if there was nobbut a white road windin’ is like ut; strangely like. Moors an’ moors an’ moors, wi’ never a tree for shelter, an’ gray houses wi’ flagstone rooves, and pewits cryin’, an’ a windhover goin’ to and fro just like these kites. And cold! A wind that cuts you like a knife. You could tell Green-how Hill folk by the red-apple colour o’ their cheeks an’ nose tips, and their blue eyes, driven into pin-points by the wind. Miners mostly, burrowin’ for lead i’ th’ hillsides, followin’ the trail of th’ ore vein same as a field-rat”.
From “On Greenhow Hill”, a short story by Rudyard Kipling.

Reproduced here from the church’s own guide

One thought on “St Mary’s Church”