Some interesting reminiscences of the prosperous and populous days of Greenhow Hill are recalled by Mr John William Whitehead, the oldest native resident of the village, who was born at Mt Pleasant Farm on April 22, 1857. Mr Whitehead lived for many years at Mount Pleasant, which is about half a mile above the church and which has been the residence of the Whiteheads for many years. He is the brother of the late Rev. Robert Whitehead, a Wesleyan minister, who passed away three years ago at Gamblesby, Penrith, at the age of 69 and who occasionally returned to Greenhow Hill to conduct the chapel anniversaries.

The never-to-be-forgotten days, said Mr J. W. Whitehead to our representative, were those of the feast which was annually held in September. “On the Monday the villagers assembled in the Methodist schoolroom for tea, and there were six hundred of us in those days,” he added. “The brass band which we had in Greenhow marched up and down the village playing lively airs, and in the evening we had a great meeting in the chapel. The fun of the fair began in earnest on the Tuesday. The band assembled in front of the Miners Arms and sports were held on the road. The farmers brought out their horses and the ‘Greenhow Hill Derby’ took place to the shouts of the respective supporters. Mr Garbutt, who recently passed away, had his roundabout in front of the Miner’s Arms and all joined in the fun. Dancing was in the road to the music of the band, of which there were twelve members, who journeyed to Howstean and other places to engagements. The people of Greenhow in the old days lived as one family community. When times were hard they helped one another.”

For forty years Mr Whitehead was society steward and superintendent at the Sunday school, and he has occupied most of the official positions at the chapel. Those were the days, he said, when all the villagers attended divine worship and Greenhow had one of the best choirs in Nidderdale, music being provided by the fiddlers, with Duncan Maxwell as the conductor. Greenhow always had a good staff of local preachers and could conduct its own services without outside help.

The miners at Greenhow worked six days a week in six-hour shifts for 2s 6d a shift. A number of Welsh miners were living at Greenhow and Hardcastle in Mr Whitehead’s younger days.

Mr Whitehead recalled the tragedy that occurred on Greenhow Hill when two boys were killed by gunpowder while playing near the gunpowder magazine in Dry Gill, where 24 kegs of powder had been brought from Grassington.

“All the powder would not go into the magazine and some was left outside,” said Mr Whitehead. One of the kegs had broken and some of the powder had escaped, the boys firing it with matches. A terrible explosion followed.” “Coffins were made and the bodies taken to the church the next day. The Vicar resident at Greenhow at the time refused to allow the coffins to be taken into the church as the parents were chapel people and the children had not been christened in his church. An uproar followed and the Vicar consented to allow the bodies to remain in the porch. For the funeral the village was in deep mourning.”

“When the lead was won from the mines it was taken to the smelthouse mill, near Foster Beck, Pateley Bridge, then to the rolling mill, from which it was carted to the station and sent away.”

The most severe winter Mr. Whitehead remembers was in 1884. Drifts of snow were to the height of twenty and thirty feet. Sheep on the moors were buried and the roads were impassable.

Mr Whitehead resides with his son-in-law and daughter, Mr and Mrs Lonsdale, of the Miner’s Arms, at Greenhow Hill, and enjoys good health.

From an undated newspaper cutting. 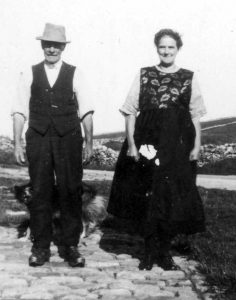