In the late 1800s water became increasingly important as the population in the towns increased. Towns like Bradford invested large amounts of money in building reservoirs and the associated waterworks to bring water many miles to the rapidly increasing population. At the time the pipeline was constructed, the mines were beginning to struggle to keep solvent. In 1889 the Harris Mine at Craven Cross was having problems due to a large influx of water that had suddenly flooded the lower parts of the mine. 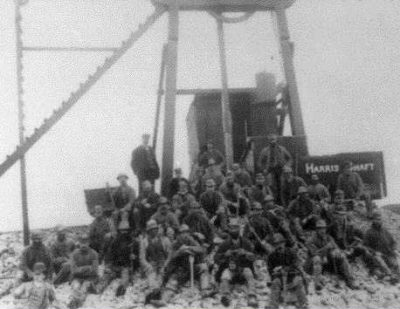 This stopped work in the deepest and richest part of the mine. As lead prices were low and continuing to fall, pumping water, which increased the cost of the ore was out of the question. The following decision gave them renewed hope.

“The Bradford Corporation Waterworks Committee have decided to run a tunnel from Nidderdale to Wharfedale, which will pass through, intersect and drain the veins in the eastern part of our set, the importance of which cannot be over estimated.” The Mining Journal, 1889 (N.M.R.S)

The aqueduct from Nidderdale stretched from Haden Carr reservoir to Chellow Heights reservoir on the outskirts of Bradford. The Greenhow section of the tunnel was about three and a half miles in length ending at Skyreholme. It crossed Greenhow between 1894-99, sinking No.2 shaft in 1897. In October 1899, the Corporation granted £5 towards the workmans celebration marking an end to the tunnel, unfortunately for the miners this was too late to save Harris Mine which, had closed around 1893. James Backhouse mentioned the tunnel in an article on lead mining in Yorkshire, published in the Naturalist in 1906.

“Cockhill Level (Greenhow) branched into many miles of levels, from which a great weight of lead was taken; yet the supply is by no means exhausted, for the Bradford Corporation, when recently making their pipe track across Greenhow Moor cut a very large vein of ore”.

Other reports state that they did in fact cut 13 veins with a quantity of ore being removed in the driving of the tunnel. Large quantities of water were recorded as flooding into to the tunnel and the tunnel gained water as it passed through the area effectively draining a large area of the mining field.

The proving of veins at depth led to a renewed interest in mining. Several mines were reopened in 1914 by Harald Bruff and the Greenhaugh Mining Co., and in June, 1926 Pateley Mines Ltd were allowed the use of No 2 Shaft and use of the surface land owned by Bradford Corporation Waterworks (BCWW), for 1 year. It was agreed that the aqueduct should be sealed from the mine workings and the mine workings were not to undermine the aqueduct. In January 1929 Pateley Mines Ltd purchased the shaft and 1.6 acres of land for £500. It was then sold to Mr Clay of the Caldbeck Mining Co in 1930 who operated there until 1937. In the mid 1950’s Mr Clay offered the shaft back to BCWW for £2000, this offer was refused. Mr Clay died in 1962 and the shaft was repurchased by BCWW for £400.